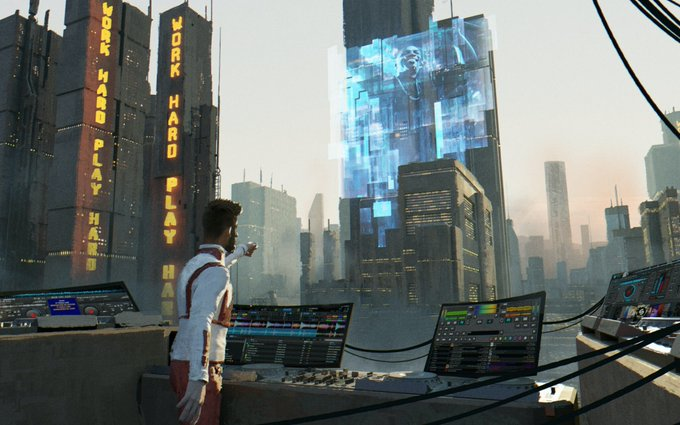 Facebook has changed its name to Meta and declared the metaverse to be the future of the internet. Earlier this year Epic, maker of the online multiplayer game Fortnite, raised a $1bn funding round showing that investors were willing to put big money into immersive online experiences.

Suddenly metaverse has become the biggest buzzword in tech and every investor wants a slice of it. But what actually is the metaverse? Is it just about VR glasses and playing games? Is it completely overhyped already? And what are the big money-making opportunities in it? We tackle some of these questions in this beginner’s guide.

What is the metaverse?

Science fiction writer Neal Stephenson coined the term “metaverse” in his 1992 book Snow Crash, using it to mean a computer-generated universe. It is generally understood to be a highly immersive, shared virtual world where people gather to play games, socialise and to work.

It’s also tied to the development of Web3.0, which some believe will be the next chapter of the internet’s existence — one built on blockchains that, theoretically, will democratise access and power and weaken the grip of the biggest tech companies.

The concept is not really new. Back in the early 2000s there were a lot of forerunners to the metaverse, including Second Life (launched by Linden Lab in 2003) and Habbo Hotel, made by Finland’s Sulake. They’ve dropped off a lot of people’s radars since then but both are still going — Second Life still has 200,000 daily active users.

Why do we think the metaverse will take off this time?

The big tech companies are going all guns blazing on the metaverse. Mark Zuckerberg is all in, while Microsoft wants to build the enterprise metaverse.

Meanwhile, online multiplayer games like Fortnite, Minecraft (owned by Microsoft) and Roblox have already made social gaming a mainstream phenomenon and have created platforms that can be the building blocks for developing the metaverse. Some games developers believe that Roblox — yes, that boxy game beloved by 7 to 12-year-olds — could be the most powerful metaverse platform of the future. Minecraft, meanwhile, runs on Hadean cloud software which can scale up to thousands of users per world.

The computing power to scale virtual reality to a massive scale is only now emerging. Companies like Hadean and Improbable, which specialise in creating large-scale distributed computing can get 10,000 players on the same server simultaneously. Many metaverse companies are talking about hosting concerts and sporting events for 50,000 people simultaneously — something that would have been unthinkable only a few years ago.

Cryptocurrencies and non-fungible tokens (NFTs) make it easier to buy and sell things inside the metaverse, opening up commercial opportunities. But more importantly, these exchangeable tokens will also eventually make it possible to move your virtual identity and goods between different metaverse worlds — you could take your pixelated sword from a Roblox game and turn it into a powerful gun in Fortnite, for example.

This is when the metaverse becomes truly “meta” and you can hop around seamlessly between platforms in the way that sci-fi novels like Snow Crash and Ready Player One imagine. Think of it like that moment in the 1990s when mobile phones started allowing people to text each other across different networks, and suddenly mobile messaging exploded beyond anyone’s expectations.

Is the metaverse just about playing video games?

No. Games are an obvious starting point, but if you take the broader Web3.0 view, the metaverse is about much more. Fortnite has hosted concerts by Ariana Grande and Travis Scott, while Lil Nas X’s Roblox concert last year got 33m views.

This is why startups like Paris-based Stage11 are interesting. Stage 11, which just raised a $5m seed round from Otium Capital, is building immersive music experiences for the metaverse and has partnerships with artists like David Guetta, Snoop Dogg, Ne-Yo and Akon.

A huge number of creatives, from musicians to fashion designers, will build businesses around providing goods and services for the metaverse. London-based Gravity Sketch recently launched a virtual collaboration room where designers can remotely work together on the same 3D design project.

On the more business-focused side, there is the potential for meetings, education and healthcare. Swedish startup Warpin, for example, is building VR training videos for companies and did a pilot project with digital doctor service Kry, where socially anxious patients were able work through their fears by going into immersive virtual social scenarios together with a therapist.

Even Nvidia’s Omniverse creating a digital twin of a BMW factory is part of a metaverse of sorts. It might be a boring metaverse but it still counts, as technicians will be able to collaborate with each other in it.

In general, every company is likely to have some kind of metaverse presence, says Mike Allender, chief executive and cofounder at Talewind Studios, which is developing games for the Roblox platform.  “Every company has a 2D website right now. In the metaverse it will have a 3D version of that.”

Hundreds of companies, from seed-stage startups to tech giants, are finding their places in the metaverse ecosystem already.

Will I have to wear VR glasses?

No. Some metaverse experiences do rely heavily on VR headsets — for example, immersive meetings and training. So companies like Varjo and Magic Leap, which are creating VR glasses, and companies like Ultraleap and Gleechi, which are developing hand tracking and ways to manipulate virtual objects, are definitely worth watching.

But very few of the kids playing Roblox or Minecraft are doing it with VR glasses on. They are mostly on mobile devices.

What are the main risks of the metaverse?

Lawyers warn that the metaverse will see disputes over intellectual property and ownership, data protection, content licensing as well as risks around crypto assets. Many lawsuits will have to be fought to establish the rules — in September, for example, Roblox settled a lawsuit with the US National Music Publishers Association which paves the way for artists to be able to debut their music in the metaverse.

But for investors, the biggest risk is figuring out which companies really know how to build a compelling metaverse that people will want to join and return to, says Isabel Fox, general partner at Outsized Ventures, which recently invested in Hadean.

“Some founders will take a ‘build it and they will come’ approach and fail. Success or failure will be fast. The best teams will win out,” says Fox.

Another risk, says Ted Persson at EQT, is that the metaverse remains too fragmented and people can’t take their virtual identities across different platforms.

“Multiple businesses are fighting to become the glue between the different virtual worlds but the risk I see is that no strong winner emerges leading to fragmented communities.”

Will it be dominated by the big tech giants like Facebook and Microsoft and does that matter?

A battle is brewing over whether the metaverse will be ruled by one company like Facebook, or have multiple companies that collaborate.

“What Facebook is proposing in the metaverse is very much centralised control over an entire ecosystem. The alternative model is embodied by what we’re seeing in the blockchain space where multiple digital currencies will coexist and multiple companies collaborate,” says Jean-Philippe Vergne, associate professor at the UCL School of Management and author of a recent paper on the metaverse’s prospects. “I think this is the war that will take place over the next 10 years.”

Most metaverse-watchers doubt that Facebook will be able to dominate the metaverse.

“I believe it’s unlikely this will happen,” says Persson. “Most individuals building on the metaverse seem to agree on a collective desire of openness and decentralisation; to make this a reality, a diverse community and competition are crucial. So, unless those large players find a way to crack distribution of digital worlds and products, I don’t believe they will emerge as winners.”

“As Twitch showed us in the past, the market leader in the metaverse will come from a challenger”

Olivier Martret, principal at French VC firm Serena, says: “It is really interesting to see Facebook or Microsoft to move into the metaverse because they know it will be a considerable opportunity for them but as Twitch showed us in the past, I assume the market leader in the metaverse market will come from a challenger.” His firm invested in metaverse games company Powder earlier this year.

“When it comes to cash, investments in cryptocurrency and Web 3.0 are making the news, but mostly because this is a nascent space where use cases are being developed every day; the numbers themselves are seldom super-high,” says Persson.

Investors are still, for the most part, playing a wait-and-see game to see which young startups are worth backing. Most of the funding rounds have been seed and Series A.

“When we really can co-create… it will really explode.”

We’re still a couple of years away from being able to really jump seamlessly between apps, says Warpin’s Ridderstad. “But when we really can co-create and meet people around the globe, working together with different projects, I think it will really explode.”

Maija Palmer is Sifted’s innovation editor. She covers deeptech and corporate innovation, and tweets from @maijapalmer

The industrial data revolution: What founders got wrong

The Rise of Intangible Capitalism

Benefits of Artificial Intelligence in Business

Getting noticed: the potential of AI

What America’s largest technology firms are investing in – The Economist

In the New Disney Pixar Movie Lightyear, Time Gets Bendy. Is Time Travel Real, or Just Science Ficti...
The myth of the myth of the lone genius
Artificial intelligence is already upending geopolitics