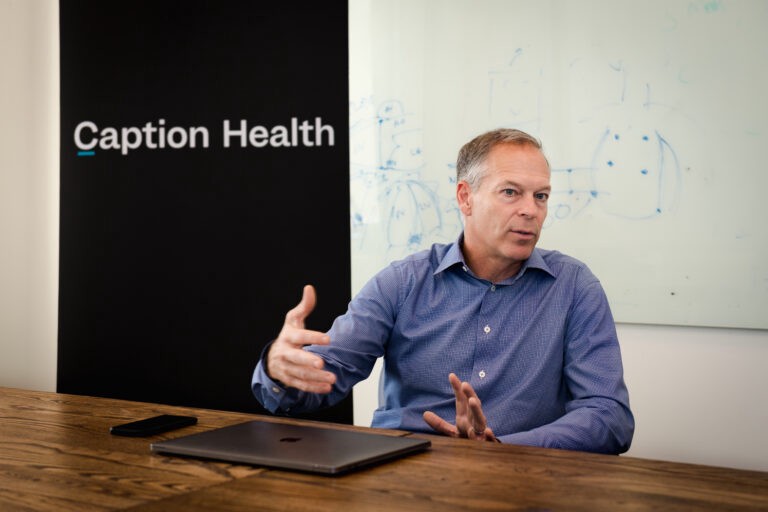 Let’s assume you are not an expert highly trained in medical imaging. And let’s assume you were invited one day to try out a new technology for heart ultrasounds — diagnostic tools that are notoriously difficult to use because of the chest wall and because some shots must be made while the heart is in motion. Could you do it? Maybe. When I was given the shot on a recent day, I was able to take the ultrasound in a matter of minutes with the help of software, developed by a San Francisco-based startup called Caption Health. The software told me how to hold the ultrasound probe against the ribs of a model who had been hired for the purpose of my visit and knew on its own when to snap the image. It was a little like having Richard Avedon’s knowledge of photography uploaded into the guts of my iPhone camera. You can see the image I took of the parasternal long axis view of the heart pumping at the top of this page. If the technology holds up, Caption, until recently called Bay Labs, could succeed in solving the problem of making heart sonograms easier to obtain. It’s already impressed some in the life sciences. Among them is health care executive Andy Page, who spent four years as Anne Wojcicki’s right-hand man at 23andMe and a year as the president and chief financial officer at digital health startup Livongo. He was introduced to Caption Health last fall by one of its investors, the billionaire Vinod Khosla. He has chosen to become its chief executive. “I was interested in how AI could impact health care,” Page told STAT. “Knowing it was a trend that was coming, my thought was that to really impact health care, the AI implementation would have to be straightforward, understandable, practical, trusted. And that’s exactly what the company was doing.” The use of AI in ultrasound is becoming a hot area. Butterfly Network, which launched a handheld ultrasound device that is much cheaper than competitors early this year, is also working on AI. Ultromics, based in London, is also working on using AI in ultrasound. I had used Butterfy’s technology two years ago to take images of my carotid artery. The experience of using Caption’s was similar in a lot of ways, but it was obvious that the images I captured with the latter technology were harder-to-get shots. “The word revolutionary is probably overused a lot these days with a lot of the tech things we have coming out, but this has the potential to really change how we’re treating our patients in the not-distant future,” said Dr. Patrick McCarthy, the executive director of the Northwestern Bluhm Cardiovascular Institute, who was primary investigator of a study of Caption’s AI but said he has no financial relationship with the company. McCarthy said he thinks the AI could “democratize” heart ultrasound by increasing the number of health care professionals who can give the test, meaning that more patients who should have it will. Caption was founded in 2013 by Charles Cadieu, its president, and Kilian Koepsell, its chief technology officer. Cadieu spent his early adult life moving between the Massachusetts Institute of Technology, from which he has a master’s degree in engineering, and the University of California, Berkeley, where he received a Ph.D.

Behind the phone: The importance of human connections in improving mental health helpline technology

Uber and Lyft are taking on healthcare, and drivers are just along for the ride

The Brain Implants That Could Change Humanity – The New York Times

How Virtual Training Is Set to Change Nursing Education