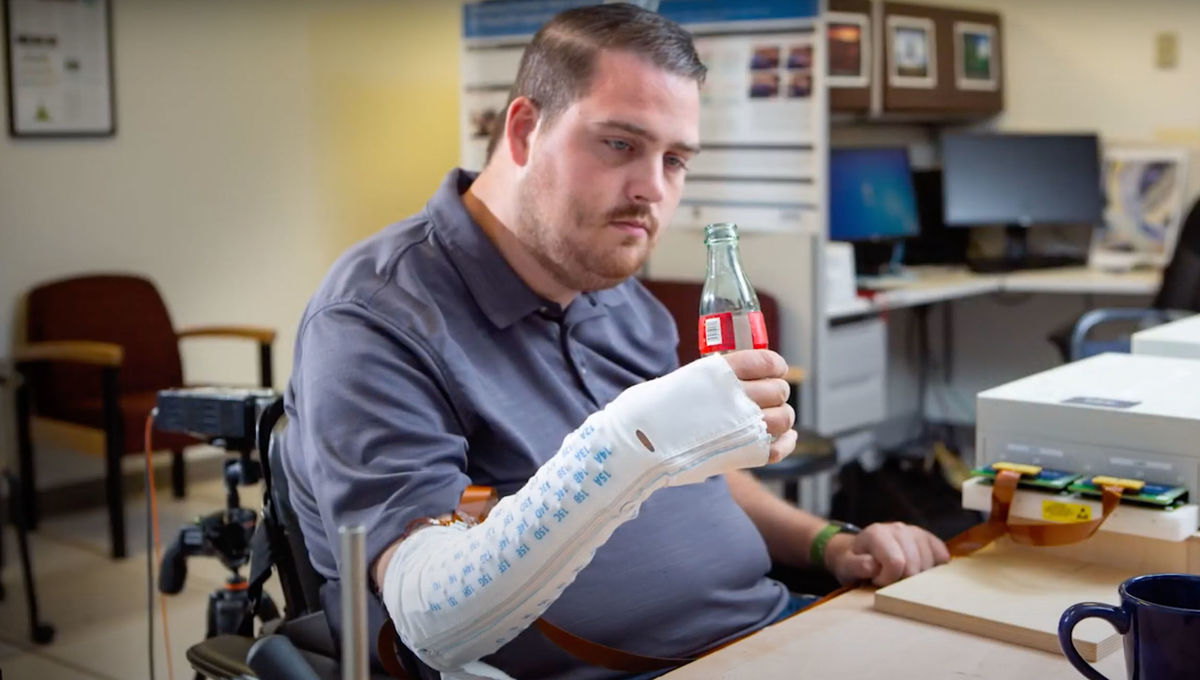 Paralysis used to mean a life sentence of immobility with no way out—until now.

Back in 2010, Ian Burkhart suffered a devastating injury that would leave him mostly paralyzed. Even though he was still able to move his shoulders and elbows, he had lost sensation in his hands. That was until Patrick Ganzer at Battelle Memorial Institute fast-forwarded biotech into the future by developing a brain implant that would turn Burkhart’s life around. When the implant connects to a specialized brain-computer interface, it does something that has never been done before and has restored both movement and touch in his right hand.

“Paralyzed muscles can be reanimated following spinal cord injury (SCI) using a brain-computer interface (BCI) to enhance motor function alone,” Ganzer and his research team said in a study recently published in Cell. “Importantly, the sense of touch is a key component of motor function.”

Not only did the implant and BCI give Burkhart his sense of touch back, but they have also allowed him to do things like swipe a credit card and play Guitar Hero again. Ganzer was able to do this by tapping into the potential of residual touch signaling in Burkhart’s hand. These were brain signals for touch that were so faint, Burkhart was unable to perceive them otherwise. It used to be assumed that severe spinal cord injuries eliminated all transmission of sensory information to the skin, but when a patient touches they cannot feel, stimuli actually provoke changes in brain activity. It is now thought that some somatosensory nerve fibers (which send the brain information about objects in our environment through touch) survive even what is considered to be a clinically complete spinal cord injury.

Reviving sensation in the hand is particularly difficult, because with a spinal cord injury as damaging as Burkhart’s, systems that turn sensation into signals that reach the brain have been so impacted that touch signaling often blocked. So how did Ganzer do it? He used a “touch decoder” that amplified those faint residual signals to the point that Burkhart was conscious of them. The BCI recorded Burkhart’s brain activity using information from his implant (which was already able to pick up on faint sensory signals associated with touch), then zapped that information to a processor—the touch decoder—that translates signals from stimuli into movements. Information travels to a band around the forearm which uses electricity for a signal boost that gets his hand muscles moving again. The band vibrates whenever sensory information reaches the hand.

“Sensory function can potentially be augmented using a BCI that can decipher residual sensory neural activity from the impaired hand and dynamically translate this into…sensory feedback that the user can perceive,” Ganzer said. “The sense of touch is critical for multiple aspects of motor control. Beyond restoring the sense of touch alone, a BCI can potentially restore both sensory and motor function simultaneously in patients with SCI, even while the participants use their own hands.”

The function that Burkhart had left in his elbows and shoulders did help guide hand motions, but it wouldn’t have done much without the brain implant and decoder. His brain implant had been intended just to control movement when it was first inserted. That already sounds futuristic. Because the sensory and motor areas of his brain overlap, it is able to team up with the BCI so he can experience what it’s like to touch things again. As if that isn’t amazing enough, it’s almost as if the BCI thinks on its own. It can detect different levels of touch and adjust the touch strength needed for a particular object so Burkhart automatically uses the right amount of pressure to grip something. He has mastered about 20 hand grips so far.

“In the future, we hope this set of findings will enable patients with an implanted BCI to maximize the information encoded in the recorded neural activity for functional gains,” Ganzer said.

Could this kind of technology eventually make paralysis a thing of the past? You never know what could emerge when every tomorrow is the future.

Will Microsoft’s acquisition of Nuance be meaningful for physicians?
How Artificial Intelligence and Blockchain Can Reshape Healthcare Industry?
Digital Transformation in Healthcare: Creating a Global Win-Win
Tags #4_Healthtech
Healthtech

How IoT Could Transform The Business Models Of Essential Services

The Next Big Thing in Data Science is …. Biology