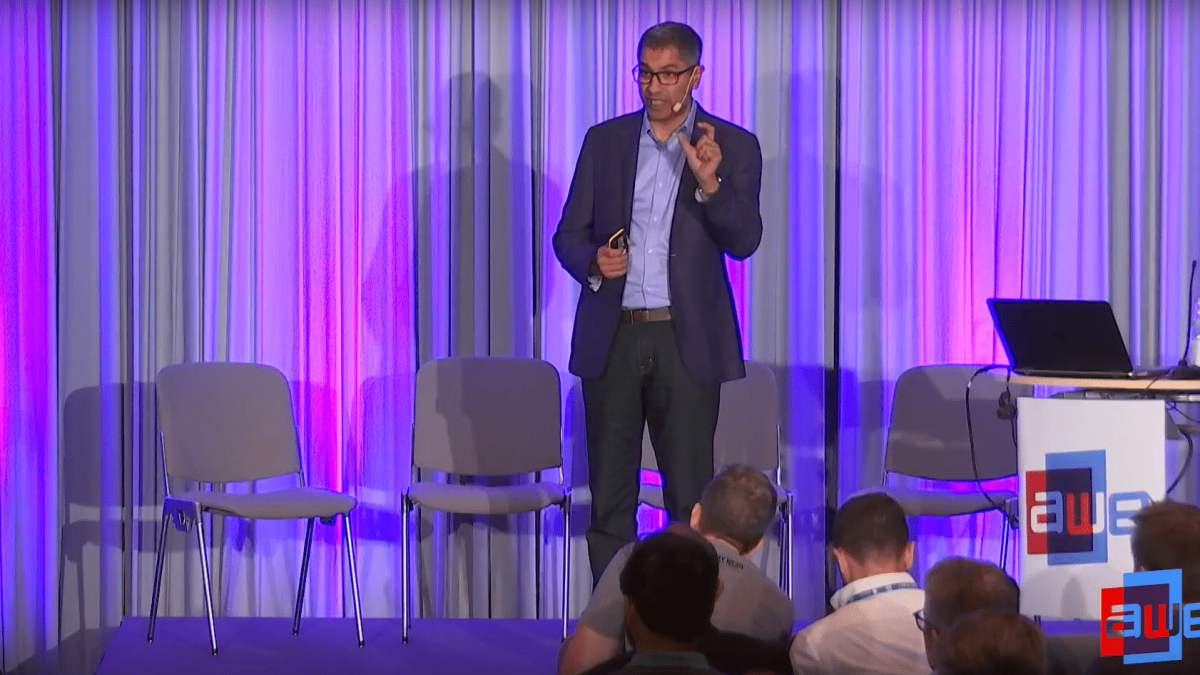 Early stages of industrial AR have given us plenty of glowing case studies from pilot projects. But the dreaded “pilot purgatory” often stalls deployment and makes long-term adoption relatively rare. It also makes those real deployments valuable in their scarcity and learnings.

One of the exemplars on that shortlist (more to come in this series) is Atheer‘s work with Porsche to drive 40 percent faster maintenance using AR. This says a lot according to Atheer’s Amar Dhaliwal at AWE Europe, given that Porsche was already operating at an elite level.

“These are some of the most trained, certified and competent auto technicians in the world,” he said. “It can take ten years to actually become a gold-certified technician. Yet when Porsche rolled out AR, it was able to achieve a 40 percent reduction in service resolution time.”

In fairness, this isn’t a new figure. In fact, Dhaliwal is first to admit that Porsche has already publicized the 40 percent stat, and for good reason. It’s a subtle message that they’re investing in AR so that customers are in good hands. This makes AR part operational and part marketing.

“When somebody’s going into a Porsche dealership they probably came from a Mercedes dealership and going to BMW next,” he said. “Porsche wants to be able to tell customers ‘Not only are you buying the best technology, but we’ll look after you once we’ve sold you.”

This message makes sense because Porsche’s point of deployment for AR is at the dealer level. It’s the dealer-centered technicians that are using AR to fix cars that Porsche owners bring in locally. So AR’s presence and value can be that much more apparent to the end customer.

As for how it achieved that 40 percent, the first step is planning and needs-assessment. AR is only successful when applied in the right places. As explored elsewhere in this report, it’s not a silver bullet: It can only be successful when used to solve specific problems in specific job roles.

Here, one important distinction according to Dhaliwal is training versus guidance. AR doesn’t do much for jobs that require training (repetitive, simple tasks). But it can have lots of impact in jobs that need guidance (complex, non-repetitive tasks). Pinpointing this should be step one.

“We’ll start by saying ‘what is it that you’re trying to do?’” he said. “If they’re trying to do something that sounds better for training, we’ll say ‘we’re not the right partner for you, because deploying this technology to solve this problem will not have the ROI that you’re looking for’.”

The next step is to win over end-users, such as technicians — a lesson we’ve heard over and over. And the name of the game is simplicity. For example, when possible, start with simpler forms of AR such as remote assistance, before graduating to things like pre-authored sequences.

“Industrial workers, the people who are the principal users of AR, have a very low tolerance for complexity,” said Dhaliwal. “Complexity is your enemy when rolling out to the industrial worker. That’s a fact and I think it’s important in terms of how we design solutions as an industry.”

The simplicity angle works on many levels. Atheer also owes its success with Porsche to simplifying the business model. In its case, it faced an additional challenge of working with individual dealers, so it created an end-to-end offer where it handles all of the logistics.

“All the glasses come into our office,” said Dhaliwal. “We pre-install the software, set up the users, put in all of the manuals and guidance. We package them up with Porsche’s branding and send them out to the dealers, because Porsche is saying ‘that’s not what we’re experts in’.”

Several of these tactics make enterprise AR success factors extend well beyond the technology itself. It’s about speaking the language, knowing the vertical you’re selling into and PR. That brings us back to the first point: AR can boost, and be boosted by, fundamentals in marketing.

“Act like a marketer,” advises Dhaliwal. “Porsche brands everything as ‘Tech Live Look.’ So everything they do, every press release, every analyst briefing, they talk about the program. Internally, the posters and packaging… when glasses go out… everything is branded.”

The good news is that there’s momentum in year-over-year demand. And enterprise use cases are naturally segmenting into categories like maintenance and training, around which Atheer is organizing its services and marketing. This makes things more digestible for enterprises.

“There’s been a huge difference and movement in the last year in terms of the type of conversations that we’re having with enterprises,” said Dhaliwal. “We see use cases [such as] maintenance and repair operations… training and certification [and] warehousing and logistics.”

Check out the full report here.

Disclosure: AR Insider has no financial stake in the companies mentioned in this post, nor received payment for its production. Disclosure and ethics policy can be seen here.

How Computationally Complex Is a Single Neuron?

Why We Buy Products Connected to Place, People, and Past

The Price of Tomorrow