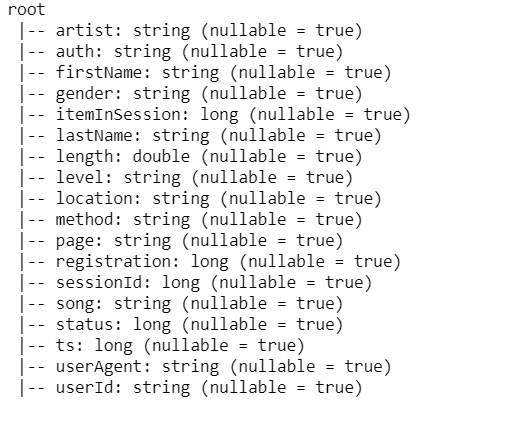 Sparkify is a music streaming company, like Spotify. The dataset contains logs of user interaction. The full dataset is 12 GB. We are working with a smaller dataset of 128MB. Using the user logs, we need to identify customers with propensity to churn so they can be offered promotions. We can identify factors which are significant indicators for churn.

The dataset contains a log of 286,500 user interactions. It has information about the user, the interactions, timestamps, device used by the user, etc. The schema of the data is as below:

The dataset snapshot is as below:

We clean up the dataset to remove records with missing userId and sessionId and where userId is empty, we have 278,154 records, since most of these records were for users who had not yet logged in or were looking to sign up. We also convert the date of registration and current time from timestamp to more understandable date-time format. The page feature lists all the possible user actions in the dataset.

We look at distribution of some features to identify patterns in the data.

There are a lot more free users for our music streaming service than paid users. We should also check if there is a predilection for churn among users of a given subscription level.

We notice that there is a higher chance for paid users churning than free users. This could be an important factor for predicting user churn.

We have more male users than female users but the numbers don’t differ by a lot, so we can consider our dataset as mostly balanced wrt gender.

We notice that the there is a higher propensity for male users to churn, compared to female users. We could also analyze the trend with subscription level in the mix.

We see that free tier users listen to much less songs every session as compared to paid users. Also users who did not churn listen to slightly more songs per session on average, especially the paid tier users.

Finally let’s look at the most popular artists on our streaming service.

Since the dataset contains user interactions, we need to aggregate them at a user level to build user profile that will help identify propensity to churn.

Based on the features available in the dataset and our understanding of user behaviour, we create features that would represent user engagement, user profile, etc.

We identify features like user lifetime, gender of the user, etc.

We also create features for user engagement like number of friends added, number of songs added to playlist, thumbs up and thumbs down given to songs.

Once we create these features, we merge them for each user to create the final database that we will use for modeling.

Next we move to the modeling part.

Note: The medium-size dataset of 230 MB was used for the modeling part and training was done on IBM Watson cluster, while the EDA was done on the mini dataset of 128 MB.

Before we start modeling on our dataset, we need to convert our features to numeric features and then we scale the features. Scaling the dataset or not depends on the models that we plan to use. We will also split our dataset into train-validation-test sets to ensure accurate assessment of model performance. I used a 70:15:15 split for the dataset.

Now that we have our dataset ready, we will test it against a baseline model. Before we build our models, we define the problem as a Binary classification problem where 0 represents user does not churn and 1 represents that user churns. Also, since our dataset is imbalanced, accuracy might not be the best measure as we could predict all values as 0 and have a high accuracy and yet poor recall. So, to balance this, we use F1 as our metric.

Next, we tune our Random Forest Classifier model. Once we have a final model, we use it to benchmark model performance by making predictions on test set.

We can have a look at the feature importance of our model.

We see that user_lifetime has by far the most impact on predicting churn.

We explored churn prediction problem using CRISP-DM process. This is very similar to real problems that adds business value. We can retain users and increase revenue for company by strategically implementing insights gleaned from the exploration and modeling.

Accuracy is not a reliable metric for a highly imbalanced dataset like this, so we used F1 score. We could also have tried SMOTE for oversampling or random undersampling of our dataset to balance the classes.

We can extract other features like device used by users and see their effect on churn prediction.

We tried the modeling exercise on small and medium dataset. We can explore the full 12GB dataset. Having more records for the minority class would improve the predictive power.

The full code for the project can be found on my Github.

Churn Prediction using Spark was originally published in Towards Data Science on Medium, where people are continuing the conversation by highlighting and responding to this story.

6 reasons to consider data automation in 2020

DataOps: The Future for Healthcare Automation