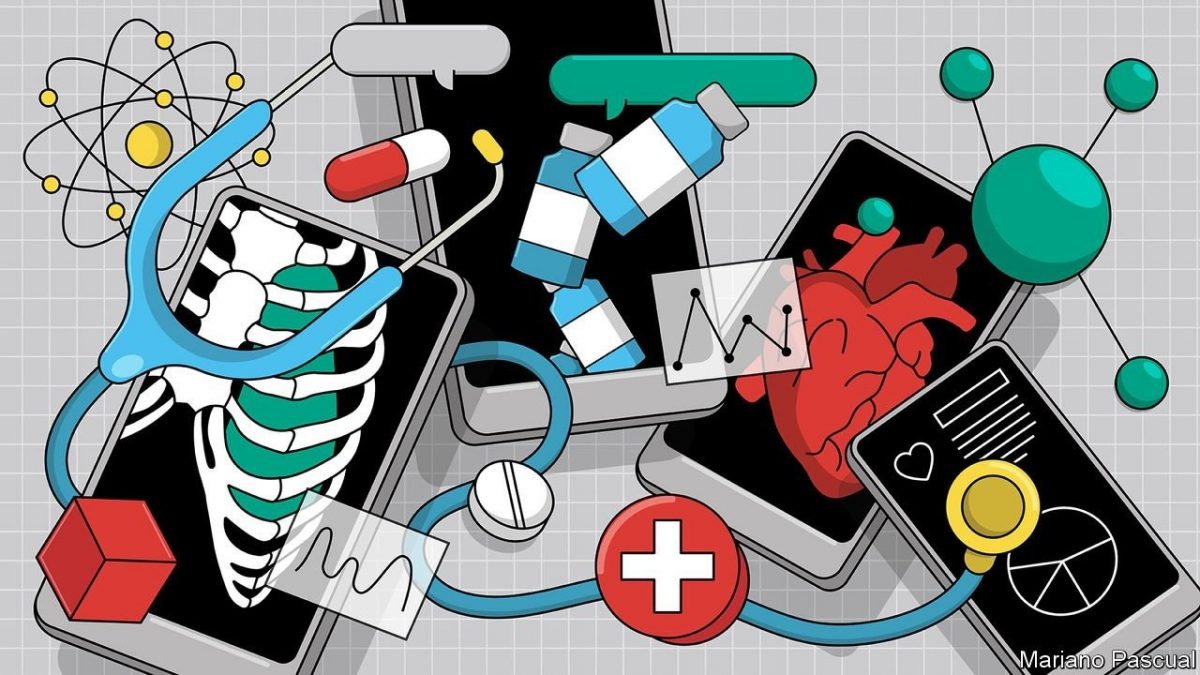 How health care is turning into a consumer product – The Economist

TECH AND health care have a fraught relationship. On January 3rd Elizabeth Holmes, founder of Theranos, a startup that once epitomised the promise of combining Silicon Valley’s dynamism with a stodgy health-care market, was convicted of lying to investors about the capabilities of her firm’s blood-testing technology. Yet look beyond Theranos, which began to implode way back in 2015, and a much healthier story becomes apparent. This week a horde of entrepreneurs and investors will gather virtually at the annual JPMorgan Chase health-care jamboree. The talk is likely to be of AI, digital diagnostics and tele-health— and of a new wave of capital flooding into a vast industry.

The prize is gigantic. Health care consumes 18% of GDP in America, equivalent to $3.6trn a year. In other rich countries the share is lower, around 10%, but rising as populations age. The pandemic has made people more comfortable with online services, including digitally mediated care. Venture capitalists detect a sector that is uniquely ripe for disruption. CB Insights, a data provider, estimates that investments in digital-health startups nearly doubled in 2021, to $57bn (see chart 1). Unlisted health-care startups valued at $1bn or more now number 90, four times the figure five years ago (see chart 2). Such “unicorns” are competing with incumbent health-care companies and technology giants to make people better and prevent them from getting ill in the first place. In the process, they are turning patients into consumers.

Consumer health care has long been synonymous with over-the-counter painkillers, cough syrup, face creams or Band-Aids peddled by big drugmakers. In a recognition that their uninnovative consumer divisions have become a drag, Johnson & Johnson, America’s (and the world’s) most-valuable pharmaceutical company, and GlaxoSmithKline, a giant British rival, are spinning them off. The hope is that without the cross-subsidy from the more lucrative prescription-drug arms, the rump consumer businesses will spruce up and become more inventive. Some more adventurous incumbents are already experimenting with digitisation and consumerisation. Teva, an Israeli pharmaceutical firm which dates back to 1901, has developed a digitally enabled inhaler equipped with app-connected sensors that tell users if they are employing it properly.

Left to their own devices

The second group of companies with new consumer-health ambitions is big tech. After a series of abortive attempts to tiptoe into the health business—as with Google’s short-lived platform for personal health data, scrapped in 2011—the technology giants are finally finding their feet. According to CB Insights, Alphabet, Amazon, Apple, Meta (Facebook’s new parent company) and Microsoft collectively poured some $3.6bn into health-related deals last year. They are particularly active in two areas: devices and data.

The technology giants are also injecting health-related services into their cloud-based data-crunching offerings. To that end Microsoft paid $20bn last year for Nuance, an AI firm. Amazon Web Services, the e-emporium’s cloud arm, has also launched a health-care offering. Oracle, an increasingly cloud-based business-software firm, is finalising an acquisition of Cerner, a health-IT group for $28bn.

Then there are the upstarts, which offer products and services of varying degrees of complexity. Some are simple online pharmacies. Truepill, a six-year-old American company valued at $1.6bn, now fulfils 20,000 prescriptions a day and runs last-mile logistics for a range of consumer-facing health brands. One is Hims & Hers Health, a big American e-pharmacy that went public a year ago via a reverse merger with a special-purpose acquisition company. Another is Nurx, which provides pre-exposure prophylactics for people at risk of contracting HIV. PharmEasy, an Indian online pharmacy, raised $500m in capital last year.

Telemedicine firms, which offer a greater range of health services, have thrived as covid-19 has strained clinics’ capacity and put patients off in-person visits for fear of infection. China’s WeDoctor, a privately held operator of what it calls “internet hospitals”, was last valued at nearly $7bn. Teladoc, a listed American firm with a market value of $13bn, reported revenues of $520m in the third quarter of 2021, up by 80% year on year.

Another, more sophisticated area experiencing rapid growth is at-home diagnostics. The Theranos scandal gave consumer diagnostics a bad name. Now better technology and greater realism about what it can achieve are rehabilitating the field, just as the pandemic has accustomed people to the idea of home-testing.

This includes devices to analyse everything from blood sugar to stool samples. Levels Health, a two-year-old American startup, sells app-synced continuous glucose monitors directly to consumers, after seamlessly connecting them via the internet with prescribing doctors. Its founder, Josh Clemente, was inspired by having to ask a friend to smuggle such a monitor for him from Australia to confirm his hunch that he was, like one-third of Americans, pre-diabetic—in America the devices were available only on prescription to people with uncontrolled diabetes. The startup’s waiting list now stretches to 145,000 people. Digbi Health, another American firm, uses fecal matter to analyse its customers’ gut microbiome to promote gastrointestinal health. Skin+Me, a British one, uses selfies to save people a trip to the dermatologist by providing prescription-grade skin care. Thriva, also from Britain, analyses blood from finger pricks to shed light on conditions such as high cholesterol and anaemia.

A big reason why it has taken so long for consumer technology to disrupt health care is that the highly regulated sector does not lend itself to Silicon Valley’s “move fast and break things” mentality. But recent years have shown that disruption is possible even in rule-bound industries. Hamish Grierson, was inspired to found Thriva after witnessing a digital shake-up in his old job in payments. Levels Health’s Mr Clemente, helped keep astronauts fighting fit at SpaceX, which has prised open the once government-dominated spacefaring business.

One strategy is to position yourself as selling “general wellness” products to evade rigorous scrutiny, and only consult medical professionals for advisory purposes or to convince potential investors that their products are backed with science. Thriva, for example, says its blood tests offer “insights” rather than official diagnoses.

Other companies, especially those with higher-tech offerings, are treading carefully. Manny Montalvo, who oversees “Digihaler” sales at Teva, insists it is not a consumer product. “This is still medicine and the right medicine has to be selected for the patient,” he says categorically. Apple sought clearance from America’s Food and Drug Administration (FDA) for its new watch’s ECG function.

The regulators, for their part, are trying to move faster themselves. The newly minted FDA chief is a former adviser to Google Health, the tech giant’s health venture. The industry hopes that on his watch the agency will finally adopt long-delayed standards for digital-health software. Australia, Japan, Singapore and the EU have set out digital-health strategies in order to create similar standards for determining the quality, safety and clinical value of new health devices. More countries are adopting data-protection rules that ought to make it clearer to entrepreneurs, investors and consumers what data can be shared, with whom and how.

The consumer-health boom has hit snags. Investors who pushed the share prices of online pill-peddlers and digital hospitals up whenever covid-19 spiked have cooled on such firms now that the coronaviral threat has receded somewhat. After exceeding $30bn at the start of 2021, Teladoc’s market value is back where it was before the pandemic hit in early 2020. The prospects of Hims & Hers, whose share price has declined by three-quarters in the past year, may have been additionally dented by Amazon’s launch in late 2020 of its e-pharmacy business. China’s digital-health companies have been caught up in the Communist Party’s broader tech crackdown. WeDoctor has shelved plans for a blockbuster initial public offering in Hong Kong. The Theranos saga offers a cautionary tale of how tricky biology is compared with swathes of computer science.

Some products will turn out to be duds, and regulators may yet disrupt the disrupters. Still, as Scott Melville of the Consumer Healthcare Products Association, a trade body, puts it, “There is no going back to the old paternalistic system where you are relying exclusively on a medical professional for your health care.” Enterprising companies want to help people recover more quickly or, better yet, avoid getting ill in the first place. That is a negative prognosis for the hospital-industrial complex, which profits from the very sick. For everyone else, it is mostly a positive one.

For more expert analysis of the biggest stories in economics, business and markets, sign up to Money Talks, our weekly newsletter.

The Strategic Advantage of Incumbency

Is Medtech Prepared for Recovery?

The digital transformation trends and challenges within healthcare

Use of Mobile Health and Patient-Generated Data

The Pitfalls of AI Bias in Healthcare