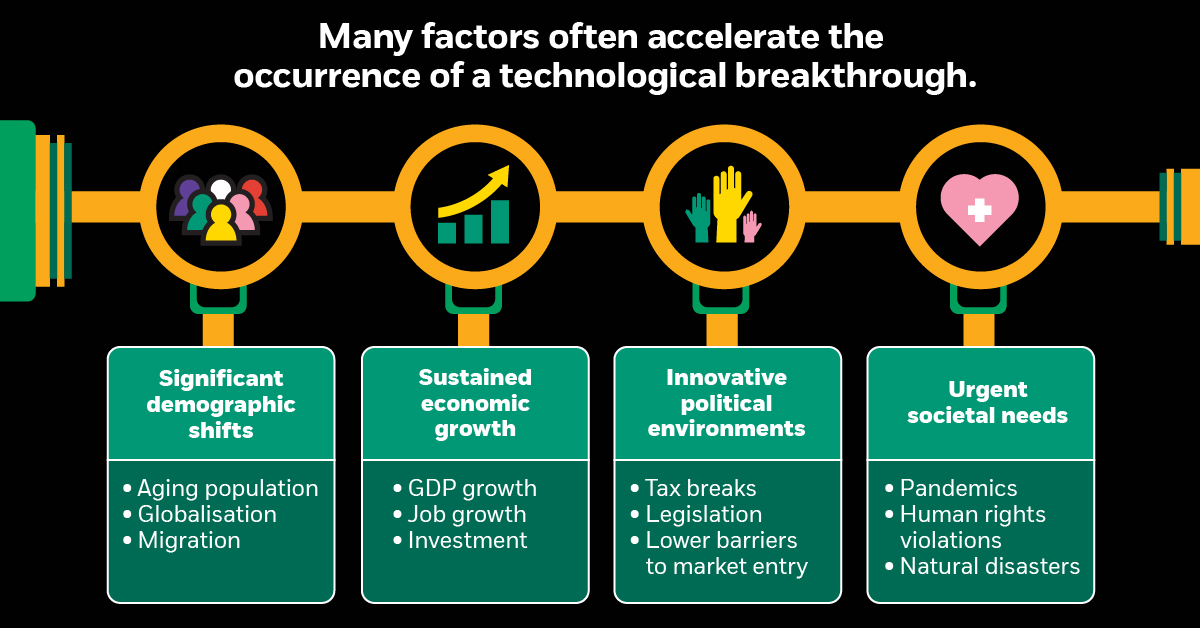 How Technological Breakthroughs are Shaping the Future of Investing

10 Global Insights into a Transforming World from 2019

Every day, global trends are reshaping society and the business landscape.

Today’s infographic from McKinsey Global Institute (MGI) presents a snapshot of 10 insights into how the world is changing, based on its research work from 2019.

How did we get here, and where are we going?

A Connected World in Flux

Globalization is making the world “shrink” every day, as humans and trade become increasingly connected. However, there are signs that point to a new phase of globalization that is leading to different outcomes than prior years.

Global exports are fundamentally shifting. Although manufactured goods are traded at higher volumes, certain services have grown up to three times faster.

The compound annual growth rate (CAGR, 2007-2017) for different sectors are as follows:

This has a profound impact on the mix of industries and countries involved in this shift away from goods and towards services. Asia is coming of age in this phase of the global economy.

Trade with and within Asia is rising, and shows no signs of slowing down. The region’s economic might is growing rapidly, and with higher disposable incomes, consumption is growing too.

In China, there is a new dynamic at play.

Compared to other developed nations, China’s economy is relatively closed. The country is re-balancing its focus towards domestic consumption and relying less on other countries for trade, technology, and capital.

At the same time, the rest of the world is increasingly exposed and tied to China for the same things—and such unequal engagement has a ripple effect on everything from financial markets to flows of technology and innovation.

Technology and the Future of Work

New technologies like artificial intelligence are sparking new opportunities, but they also raise questions about the future of work across geographies and gender.

As the costs of devices and data plummet, India’s digital adoption is surging—it closely competes with China for the highest digital population across everything from smartphone ownership to social media users.

As mass adoption of digital technologies continues, it is poised to add significant economic value to the Indian economy.

Companies worldwide are also integrating new technologies—changing the nature of work itself.

By 2030, talent and investment in the U.S. will be concentrated in a few regions—with 60% of job growth coming from just 25 hubs.

These are just some examples of places which see double-digit potential net job growth by 2030. However, all regions will face unique challenges in the next decade.

6. Automation’s Effect on Gender at Work

Globally, women and men are at similar risk of losing their jobs to automation by 2030.

While everyone needs to adapt in the age of automation, women face more barriers. They spend up to 1.1 trillion hours on unpaid care work, nearly three times that of men (400 billion hours).

Women are also often in lower-paid roles or male-dominated professions. Additionally, many women have less access to digital technology, and limited flexibility to pursue education. These factors make it harder for women to “catch up” and bridge the gap left behind by automation.

The U.S. labor share of income has been dropping for years—but ¾ of this decline has occurred since 2000.

According to McKinsey Global Institute, boom-bust commodity cycles and rising depreciation are the main factors behind this trend, more so than commonly-cited automation or globalization.

The global inequality gap has narrowed, but within developed economies, it has actually increased.

Technology and globalization have made many discretionary goods cheaper. However, basic costs such as education, housing, and healthcare have ballooned compared to the rate of inflation over the past decade.

With wages stagnating, the higher costs for basics have eaten into disposable incomes in many mature economies.

In just two decades, the distribution of economic profits has been growing increasingly wider. The top 10% of companies (>$1 billion in revenue) brings in an ever-larger share of total profits, while the losses of the bottom 10% share deepen.

In essence, the bottom 10% destroy as much value as the top 10% create—and it has only intensified in 20 years.

Compared to similar economies, Latin American countries lack mid-size companies with over $50M in revenue. The Latin American average for firms per $1T GDP is 65 firms, while 100 firms is the benchmark average.

While Asia’s share of the largest firms is widely distributed across countries, Latin American enterprises are lagging behind.

What does the Future Hold?

CEOs and leaders will need to adapt to the new age of disruption—and quickly. To become a 21st century company, they must ask 10 crucial questions about how they operate in an increasingly complex world:

As the 10 insights suggest, global trends are profoundly altering the course of our future. Their impact varies greatly depending on demographics and region.

Everyone—business leaders, policy makers, and individuals worldwide—will need to adapt to the realities of a world in transformation.

The Path and Thinking of Education Reform Driven by Blockchain Technology

Why Supply Chain Is the Next Digital Transformation

If AI Is Predicting Your Future, Are You Still Free?