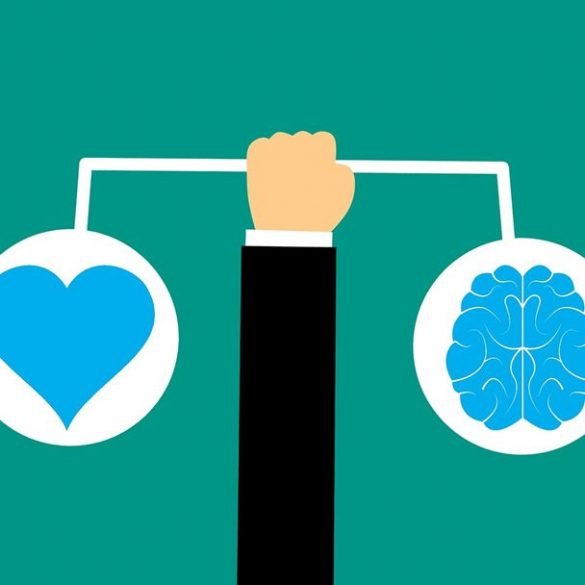 Summary: Brain activity alters over the heartbeat cycle, helping us make sure certain information is kept out of our conscious experience. The findings provide a conceptual framework to explain how internal signals integrate into our conscious perception of the world.

The first mechanism establishes a relationship between the phase of the heartbeat and conscious experience. In a regular rhythm, the heart contracts in the so-called systolic phase and pumps blood into the body. In a second phase, the diastolic phase, the blood flows back and the heart fills up again. In a previous publication from the MPI CBS, it was reported that perception of external stimuli changes with the heartbeat. In systole, we are less likely to detect a weak electric stimulus in the finger compared to diastole.

Now, in a new study, Esra Al and colleagues have found the reason for this change in perception: Brain activity is changing over the heart cycle. In systole a specific component of brain activity, which is associated with consciousness, the so called P300-component is suppressed. In other words, it seems that – in systole – the brain makes sure that certain information is kept out of conscious experience. The brain seems to take into account the pulse which floods the body in systole and predicts that pulse-associated bodily changes are “not real” but rather due to the pulse. Normally, this helps us to not be constantly disturbed by our pulse. However, when it comes to weak stimuli which coincide with systole we might miss them, although they are real.

During their investigations on heart-brain interactions, Al and colleagues also revealed a second effect of heartbeat on perception: If a person’s brain shows a higher response to the heartbeat, the processing of the stimulus in the brain is attenuated – the person detects the stimulus less. “This seems to be a result of directing our attention between external environmental signals and internal bodily signals.”, explains study author Al. In other words, a large heartbeat-evoked potential seems to reflect a “state of mind”, in which we are more focused on the functioning of our inner organs such as the blood circulation, however less aware of stimuli from the outside world.

The results not only have implications for our understanding of heart-brain interactions in healthy persons, but also in patients. The senior author, Arno Villringer explains, “The new results might help to explain why patients after stroke often suffer from cardiac problems and why patients with cardiac disease often have impaired cognitive function.”

The researchers investigated these relationships by sending weak electrical stimuli to electrodes clamped onto the study participants fingers. In parallel, they recorded each participants’ brain processes using an EEG and their cardiac activity using an EKG.

About this neuroscience research article

Even though humans are mostly not aware of their heartbeats, several heartbeat-related effects have been reported to influence conscious perception. It is not clear whether these effects are distinct or related phenomena, or whether they are early sensory effects or late decisional processes. Combining electroencephalography and electrocardiography, along with signal detection theory analyses, we identify two distinct heartbeat-related influences on conscious perception differentially related to early vs. late somatosensory processing. First, an effect on early sensory processing was found for the heartbeat-evoked potential (HEP), a marker of cardiac interoception. The amplitude of the prestimulus HEP negatively correlated with localization and detection of somatosensory stimuli, reflecting a more conservative detection bias (criterion). Importantly, higher HEP amplitudes were followed by decreases in early (P50) as well as late (N140, P300) somatosensory-evoked potential (SEP) amplitudes. Second, stimulus timing along the cardiac cycle also affected perception. During systole, stimuli were detected and correctly localized less frequently, relating to a shift in perceptual sensitivity. This perceptual attenuation was accompanied by the suppression of only late SEP components (P300) and was stronger for individuals with a more stable heart rate. Both heart-related effects were independent of alpha oscillations’ influence on somatosensory processing. We explain cardiac cycle timing effects in a predictive coding account and suggest that HEP-related effects might reflect spontaneous shifts between interoception and exteroception or modulations of general attentional resources. Thus, our results provide a general conceptual framework to explain how internal signals can be integrated into our conscious perception of the world.

The brain works differently for learning and knowing - Big Think

How We Work Has Forever Changed. It’s Time For Leadership Skills To Catch Up.

The False Choice Between Science And Economics

Design an Office that People Want to Come Back to