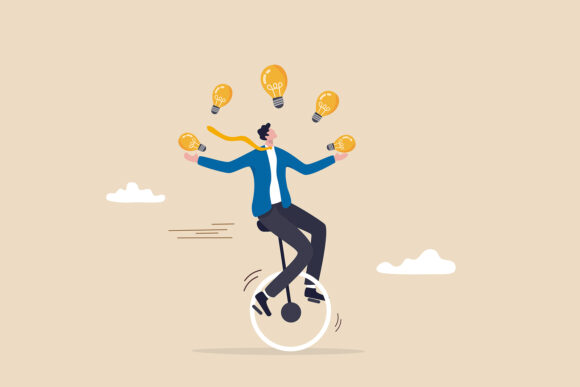 New You can now listen to Insurance Journal articles!

Any founders considering launching an InsurTech MGA should learn how to juggle, panelists said during a discussion hosted by Socotra CEO Dan Woods at the 2022 OnRamp Insurance conference.

“I don’t know if I can tell you what we did first, because we were trying to do it all at once,” said Elpha Secure CEO Preetam Dutta. “It’s like that juggling game where you just drop all the balls at times, but then you try to pick them up really quickly.”

While founders may think that adopting the right technological tools is step one, most of the InsurTech MGA CEO panelists agreed that for them, technology came later in the process.

“You start with kind of a feeling in your gut,” said Nestor Solari, CEO of Sigo Seguros. “For us, it was finding a team that was the big thing. Once we brought on a colleague, a partner, that knew insurance, I think that got us from being a broker selling insurance to knowing our customer to launching our product.”

Even after finding the right partner – as counterintuitive as it seems for an InsurTech – technology wasn’t a focus right away, Solari said.

“We had to be scrappy,” he said. “We had to get out there and build our traction. I mean, me and Julio (Editors’ note: Julio Erdo is chief operating officer and co-founder of Sigo Seguros) started with four questions on a WordPress form and dialing out and selling insurance that way. From there, that’s how we started automating and building out our own front end.”

Sigo Seguros is a mobile first auto insurance provider with a focus on immigrant and native Spanish speaking populations. Co-founded by Solari, Erdos, and Ivan Arambula in 2019, it launched its auto insurance product in August 2021 and actively serves Texas, with plans to expand into more states in 2023.

“We were doing everything manual for a while,” Solari said. “We did about a quarter million of premiums and then decided, ‘Hey, we need to launch our own product.’”

Tyrre Burks similarly began with manual processes when launching Players Health, the InsurTech MGA sports platform where he serves as founder and CEO.

“We went manual first,” he said. “And yes, that brought some limitations. We didn’t go after small policies. We focused on large premium average – premiums of about a hundred thousand dollars. We wrote about $6 million of premium, just manual, not having a platform in place. And then that helped us get a better understanding around how we would digitize the process and how we would build more efficiencies within it.”

Burks said the mission at Players Health is to create the safest and most accessible environment possible for an athlete to play the sport that they love. The company works to support sports organizations, especially those that focus on youth sports.

“I didn’t come from an insurance background. I’ve been an athlete my whole life,” he said. “We knew nothing about insurance when we first started, and so I think we focused on simplifying what can be a really daunting task to get an MGA live. One of the things we decided to do is not go straight into technology and building out a platform.”

Dutta, like Burks, also didn’t begin his career in insurance, which he said proved to be challenging.

“I’m a technologist so insurance was a new world to me, and the hardest part about us actually going live was securing insurance capacity,” he said. “In cybersecurity, I think we can all see the headlines every single day. There is a new headline every day that says this person got ransom, this person lost X amount of data, and that scares insurance carriers, which are fundamentally risk averse.”

He said that finding the right technology actually did come into play during the InsurTech’s initial launch, because the team needed to prove the efficacy of its technology. It did this through pilots and studies to give comfort to insurance providers that it could write profitable business, he said.

“That’s the thing that took a lot of time for us,” he said.

Standing Out from the Crowd

Dutta’s company, Elpha Secure, is a cyber insurance MGA that seeks to remain distinct from its competitors by embedding technology into the insurance language of its policies, he said.

“So you’re not just getting a cyber insurance policy,” he said. “You’re getting cybersecurity software all for one price.”

He said this unique approach to its business proved to be an invaluable asset as the company has grown.

Dutta said this means the InsurTech’s last priority when launching was capital. First, it focused on finding the right people.

“Capital, I think, is a byproduct of the work that you put into building the right team,” he said. “We were very fortunate that we’ve never actually gone and raised capital. We’ve been very fortunate to get inbound requests because of the team that we assembled, or the product and the differentiation. I think those are things that help you stand out as a company instead of desperately trying to raise capital first and then building a company. I think it’s company first, capital second.”

Sometimes, assembling the right team means leaving behind the team you’ve grown comfortable with, too. At least, that was the case for Matan Slagter, CEO of Armadillo, who left his career as a managing director at AIG to co-found the homeowners InsurTech MGA.

“AIG was a great platform for me. I got to do a lot of different things. I didn’t want to stay and do one thing,” he said. “So my journey was jumping off from a very comfortable job. I have two kids, I have dog, a house, a mortgage, you know, I got paid pretty nicely. Jumping off was a big decision.”

Armadillo was founded in 2021 by Slagter and Lansdon Robbins as a technology company that offers home warranty plans designed for a new generation of homeowners. Its mission is to provide an effortless homeownership experience, and its plans are available in all 50 States.

‘Don’t Be Afraid to Call Your Baby Ugly’

Indeed, taking calculated risks is an imperative part of any InsurTech MGA launch strategy, the panelists agreed, as well as accepting that things might be messy for a while.

“If I had hair, it would’ve been on fire for the last four years,” Solari said. “I mean, trying to sell insurance over the phone and failing was how we learned what insurance we had to sell, how to go to market, and kind of take calculated risks.”

“I think it’s really just jumping in and recognizing … don’t be afraid to call your baby ugly. It’s going to be ugly in the beginning,” he said. “It’s going to be ugly, recognize it, but constantly look in the mirror and figure out what you need to do to change and change it quickly.”

Dutta said that one of the biggest lessons learned as a startup founder is not only a willingness to take risks and accept chaos, but the importance of agility.

“The reason people are coming to a company that is not the incumbent is because you’re doing something fundamentally different, and in order for you to be different in insurance, that means to move fast,” he said. “In order to move fast, you need to give people what they want when they want it.”

Slagter said for Armadillo, moving fast meant jumping in first and then working through challenges along the way.

“We just jumped,” he said. “We knew things were going to be on fire. There are certain things that we not only knew would be on fire, we knew we would have to do it manually, and that was okay.”

For Solari, once technology processes were added into the mix, it proved to be an additional challenge.

“Building insurance technology is a lot harder than I expected it to be. There are a lot of things, a lot of ins and out a lot of data collection, a lot of different formats, and a lot of different sources. I think that’s something I didn’t expect,” he said. “It’s definitely still not the end of it. I mean, it’s a continuous process.”

It seems the strategy of jumping in and then moving quickly to learn how to juggle all of the tasks and challenges early in the MGA journey can pay off, according to Solari. However, he gave a word of caution for any founders preparing to launch an MGA that this juggling act never quite ends.

“It’s five, six balls up in the air constantly,” he said.

Insurance on the Blockchain
How Health Insurance Companies Use AI to Manage Risks & Reduce Costs?
The Rise Of Insurtechs Doesn’t Have To Be A Disruption Story
Tags #3_Insurance
Digital Transformation

Project Management In The Future Of Work

The rise of parametric insurance: New thinking for the new normal News and Video | youTalk-insurance.com

Direct insurance was set to disrupt the industry: What went wrong?
New tool to weed out bias in AI
Platforms, the backbone of insurance technology