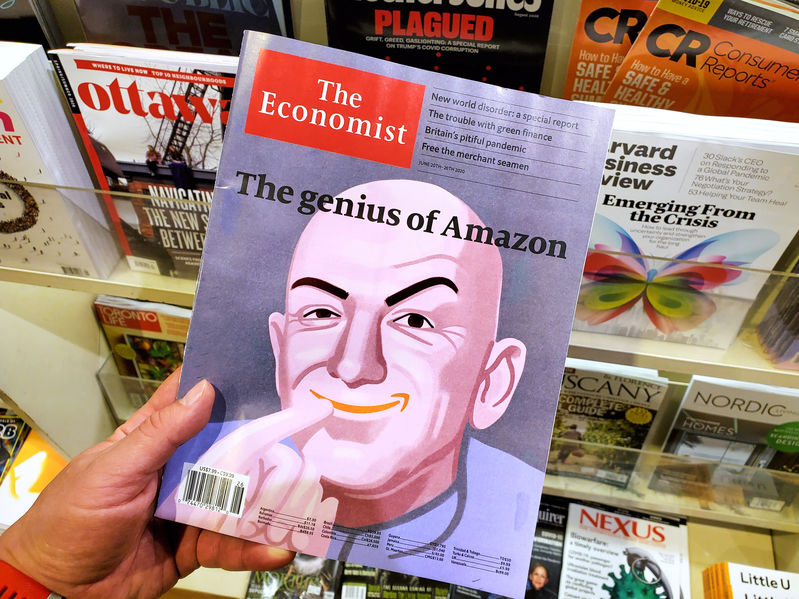 Is Amazon Making Moves to Dominate the DeFi Space?

Tim Fries, 2 weeks ago 5 min read 7
Neither the author, Tim Fries, nor this website, The Tokenist, provide financial advice. Please consult our website policy prior to making financial decisions.

Amazon recently listed a job ad seeking a profile that can integrate blockchain into its global e-commerce network. On top of its tentative digital currency project, Amazon is making key moves to enact the most common tropes from dystopian sci-fi novels.

Rarely does one see a manifestation of prestige so clearly as when we take a look at Jeff Bezos, the richest man on the planet with a net worth of $190 billion. His Amazon empire stands as a monopolistic juggernaut which he uses to fund space exploration via Blue Origin. It has grown so large that politicians are looking forward to grant him the special privilege of additional NASA contract when the original one goes to Elon Musk’s SpaceX.

A couple of days ago, Bezos announced he will embark on a journey to Earth’s orbit, alongside his brother Mark and the lucky auction winner to be selected on June 12th. The New Shepard rocket ship is set to launch on July 20, marking the 52nd anniversary of the Apollo 11 moon landing mission. Bezos framed the endeavor in spiritual terms.

“It changes your relationship with this planet, with humanity. It’s one Earth. I want to go on this flight because it’s the thing I’ve wanted to do all my life. It’s an adventure. It’s a big deal for me.”

While such a project may be inspiring, it is safe to say that space flight will be forever inaccessible for 99.9% of Earth’s residents. Their greater concern will be more grounded – gaining access to financial freedom, with decentralized finance (DeFi) being one of the key ones to leverage. It is no surprise then when Amazon takes an interest in exploring this ecosystem as well.

Join our Telegram group and stay connected to all things crypto, DeFi, and finance.

As Facebook’s Libra/Diem project shows, tokenizing the established infrastructure – ad space and social media platforms – via blockchain is the most obvious thing to do after gaining total dominance in a certain market space. The only obstacle then is the reluctance of governmental bodies, central banks in particular, to grant monetary power to private entities. Considering the increased fusion between governments and corporations, this may be less of a concern as time passes.

In the meantime, Amazon is steadily unrolling projects that aim to tokenize its domineering global market reach, having exploded by 220% during 2020/21 as a result of small-business-decimating lockdowns.

The first inkling of Amazon’s digital currency project was February’s jobs listing within its Digital and Emerging Payments (DEP) division. The yet-unnamed project is supposed to launch in Mexico first. Most recently, Amazon posted another job ad, this time for Blockchain Head of Product.

“The candidate will have a track record delivering outstanding products at scale in emerging spaces, and is passionate about blockchain, distributed systems, and cloud scale software,”

Notably, the ad specifies development experience in Hyperledger Fabric and Ethereum. This gives us a clue that Amazon’s goal is to become a major player in the smart contract game via its Amazon Managed Blockchain (AMB). The question is, what does this mean for the DeFi space as we know it?

One email every Friday, everything that matters in the new era of finance.

You’re well on your way
to being in the know.

Corporate Blockchains Have a Track Record of Success

As Binance Smart Chain (BSC) already demonstrated clearly this year, people tend to care less about decentralization as they care about the platform’s throughput – fees and transaction speed. In this light, private/corporate blockchains tend to outpace public ones. Because private, permission-based nodes are fewer in number, it takes less time to achieve consensus, resulting in faster transaction speeds.

Furthermore, these dApps would be fully integrated into Amazon’s existing ecosystems – web hosting, cloud computing, payments, affiliate programs, ebooks, deliveries, consumer electronics, digital content, and everything else you can think of.

While it’s great that Ethereum’s transaction fees have finally dropped significantly, down to its mid-2020 level, it is difficult to imagine AMB not outpacing all other DeFi spaces due to its sheer market footprint.

However, the saving grace for public blockchains comes in the form of Amazon’s total disregard for privacy concerns. Since Amazon launched its Echo device for home automation and Alexa-enabled assistance, it has received over 75,000 spying complaints. They were supposed to be settled via an arbitrage system, which Amazon abandoned last week. Instead, customers will now have to resort to a drastically costlier court system to settle privacy disputes, showing Amazon’s moral framework.

We already have a good idea what is the percentage of the people who care enough about privacy to avoid using services. According to Cisco Privacy Benchmark Study 2021, only 32% of respondents can be deemed as privacy actives – willing to enact their principles by switching services. As time goes by, we will likely see this division play out between public and private blockchains.

Do you think, eventually, most people will succumb to the convenience of everything being in one place/app? Let us know in the comments below.

The post Is Amazon Making Moves to Dominate the DeFi Space? appeared first on The Tokenist.

Productivity Begins Before You Go To Work

DeFi protocols generated more than $370 million in revenue during May

The Use Of Blockchain In Trademark And Brand Protection – JD Supra

BitGo's $700 million crypto custody insurance program: what it means and why it matters
China writes blockchain and digital currency into nation’s future - Forkast News
NFTs are much bigger than an art fad. Here’s how they could change the world