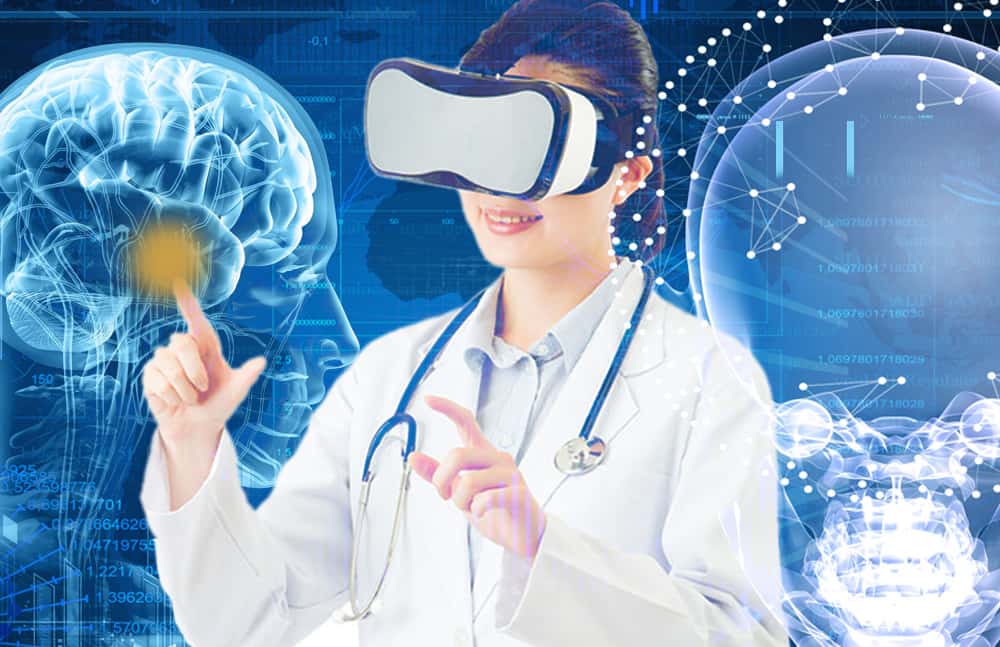 The term Virtual Reality (VR) was used for the first-time way back in 1987. Since then this technology has grown by leaps and bounds. Virtual Reality is often described as a banquet of interconnected technological devices. VR devices consist of a computer capable of interactive 3D visualization, a head-mounted display and data gloves equipped with one or more position trackers. Further, these trackers analyse and sense the orientation and position of the user to report that information to the computer which updates the images for display on a real-time basis.

Medical VR is enriched with countless possibilities bringing an enriching experience on the lives of both medical practitioners and patients.

Virtual reality (or augmented reality [AR]) has found its application to view patient data comprehensively and image this data to examine the complex parts of the body such as the heart and the brain, for further into patient biopsies examination or surgery planning.

Virtual Reality finds its application into the pharmacy in two ways, either adjunctively or as a replacement for pharmacotherapy.  Immersive VR has tremendous prospects in molecular modelling, patient examination and new drug development. What are the advantages which VR offers into drug design? We discuss this in the next section.

Virtual Reality offers numerous advantages when compared to other computer-based approaches which had earlier dominated drug design and discovery. Medical VR offers a far superior 3D-view of molecular structures and targets which enables scientists to experience and interact with these molecular models by “stepping inside” them.

Over the last few years, the rising drug development cost has outsmarted the number of drugs which have been approved by the FDA. This makes it critical for new drug discoveries. There are multiple drug combinations which have not been exploited as yet, making countless possibilities to exist. The immersive nature of Medical VR can conceivably offer solutions to concerns raised during VR visualization.

The criticality of venturing into new drugs has been discussed in the earlier segment, and an encouraging step has been taken in this direction. C4X Discovery (C4XD), a leading UK-based drug discovery company which develops new drug combinations for chronic addiction and cancer is credited to create its own VR tool named, 4Sight, which helps druggists and scientists to see the molecular structure of the drug compounds with VR technology and further design new ones.

Biochemists at C4XD have been using VR technology to develop drugs which can treat neurodegenerative diseases like Parkinson’s and dementia and chronic respiratory conditions. C4XD had been deploying its incredibly detailed proprietary database and has partnered with Invidior to try developing medicine that can treat addiction.

Researchers at C4X Discovery (Manchester, UK) are working with VR technologies with an aim to failure rates and the resultant high costs associated. Researchers are using technology to enable 4D data visualization with a hope that this will help them find the right molecule shape to fit their target. Craig Fox Chief Scientific Officer at C4X discovery ascertains, “Moving molecules around that are very complicated is so much easier by grabbing them than by trying to use a mouse on a keyboard”.

Earlier, Chemists typically relied on two-dimensional models, for drug discoveries. VR has made it possible for the scientists and chemists to see a molecule in much finer detail, track the different shapes it can take and reduce the error rate that comes with the drug discovery process.

Virtual Technology is now widely available across geographies. There is no surprise that this technology has been picked up for research and study to determine the new drug combinations. The Pharma Industry is standing at the doors to limitless opportunities into drug discovery, rehabilitation and critical diagnostics which are some of a few of the avenues that VR Medical research is taking.

In a crux, VR is reportedly more accurate and efficient to identify new drugs-like ligands compared to the traditional approaches into drug research like a fragment or diversity-oriented methods.

With the rapid advancement and increasing affordability of computer hardware and software packages, the future holds immense exciting opportunities. Medical VR is becoming more accessible to scientists and researchers making its application into drug development more widespread and accelerating the development of new drugs.

Do the sharing thingy

Kamalika Some is an NCFM level 1 certified professional with previous professional stints at Axis Bank and ICICI Bank. An MBA (Finance) and PGP Analytics by Education, Kamalika is passionate to write about Analytics driving technological change.

More by Kamalika Some

5 Challenges to Every Business Transformation and How to See it Through to the End
9 key digital transformation mistakes — and how to avoid them
Industry Targets Digital Platforms in Shift from Add-ons - Mergers & Acquisitions
Tags #6_Pharma&Bio
Digital Transformation, Healthtech

How IoT Could Transform The Business Models Of Essential Services

How AI in Healthcare Is Identifying Risks & Saving Money