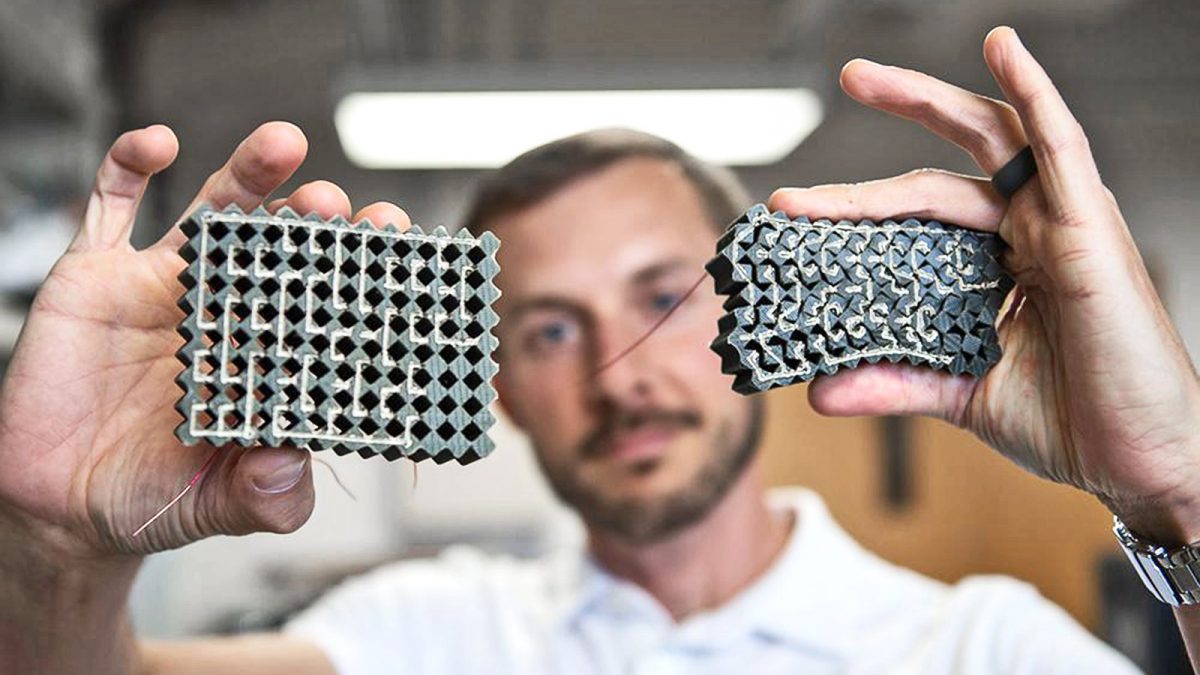 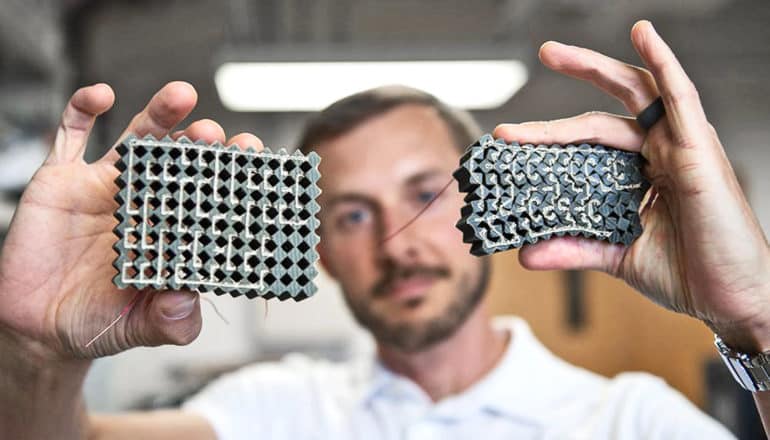 The work in the journal Nature, hinges on a novel, reconfigurable alternative to integrated circuits.

According to principal investigator Ryan Harne, associate professor of mechanical engineering at Penn State, integrated circuits are the core constituent needed for scalable computing of signals and information but have never before been realized by scientists in any composition other than silicon semiconductors.

His team’s discovery revealed the opportunity for nearly any material around us to act like its own integrated circuit: being able to “think” about what’s happening around it.

“We have created the first example of an engineering material that can simultaneously sense, think, and act upon mechanical stress without requiring additional circuits to process such signals,” Harne says. “The soft polymer material acts like a brain that can receive digital strings of information that are then processed, resulting in new sequences of digital information that can control reactions.”

The soft, conductive mechanical material contains reconfigurable circuits that can realize combinational logic: when the material receives external stimuli, it translates the input into electrical information that is then processed to create output signals.

The material could use mechanical force to compute complex arithmetic, as Harne and his team demonstrated, or detect radio frequencies to communicate specific light signals, among other potential translation examples. The possibilities are expansive, Harne says, because integrated circuits can be programmed to do so much.

“We discovered how to use mathematics and kinematics—how the individual constituents of a system move—in mechanical-electrical networks,” Harne says. “This allowed us to realize a fundamental form of intelligence in engineering materials by facilitating fully scalable information processing intrinsic to the soft material system.”

According to Harne, the material uses a similar “thinking” process as humans and has potential applications in autonomous search and rescue systems, in infrastructure repairs and even in bio-hybrid materials that can identify, isolate, and neutralize airborne pathogens.

“What makes humans smart is our means to observe and think about information we receive through our senses, reflecting on the relationship between that information and how we can react,” Harne says.

While our reactions may seem automatic, the process requires nerves in the body to digitize the sensory information so that electrical signals can travel to the brain. The brain receives this informational sequence, assesses it, and tells the body to react accordingly.

For materials to process and think about information in a similar way, they must perform the same intricate internal calculations, Harne says. When the researchers subject their engineered material to mechanical information—applied force that deforms the material—it digitizes the information to signals that its electrical network can advance and assess.

The process builds on the team’s previous work developing a soft, mechanical metamaterial that could “think” about how forces are applied to it and respond via programmed reactions, detailed in Nature Communications last year. This earlier material was limited to only logic gates operating on binary input-output signals, according to Harne, and had no way to compute high-level logical operations that are central to integrated circuits.

The researchers were stuck, until they rediscovered a 1938 paper published by Claude E. Shannon, who later became known as the “father of information theory.” Shannon described a way to create an integrated circuit by constructing mechanical-electrical switching networks that follow the laws of Boolean mathematics—the same binary logic gates Harne used previously.

“Ultimately, the semi-conductor industry did not adopt this method of making integrated circuits in the 1960s, opting instead to use a direct-assembly approach,” Harne says. “Shannon’s mathematically grounded design philosophy was lost to the sands of time, so, when we read the paper, we were astounded that our preliminary work exactly realized Shannon’s vision.”

However, Shannon’s work was hypothetical, produced nearly 30 years before integrated circuits were developed, and did not address how to scale the networks.

“We made considerable modifications to Shannon’s design philosophy in order for our mechanical-electrical networks to comply to the reality of integrated circuit assembly rules,” Harne says. “We leapt off our core logic gate design philosophy from the 2021 research and fully synchronized the design principles to those articulated by Shannon to ultimately yield mechanical integrated circuit materials—the effective brain of artificial matter.”

The researchers are now evolving the material to process visual information like it does physical signals.

“We are currently translating this to a means of ‘seeing’ to augment the sense of ‘touching’ we have presently created,” Harne says. “Our goal is to develop a material that demonstrates autonomous navigation through an environment by seeing signs, following them, and maneuvering out of the way of adverse mechanical force, such as something stepping on it.”

Additional authors of the paper are from Penn State and the US Air Force Research Laboratory.

Google Engineers 'Mutate' AI to Make It Evolve Systems Faster Than We Can Code Them
Fully Automated ‘Hands-Free’ Farm Will Replace Workers With Robots and AI
The IoT industry is broken, but can it be fixed?
Tags #1_Trends_Bonus #Saved For Later
Healthtech

A new era of engagement: the future of virtual selling to healthcare providers - Healthcare IT News

The Journey From Smart Buildings To Cognitive Cities

Bioactive inks printed on wearable textiles can map conditions over the entire surface of the body -...
Real-time Interpretation: The next frontier in radiology AI
The Future of Networking — Predictions From a Networking App Entrepreneur