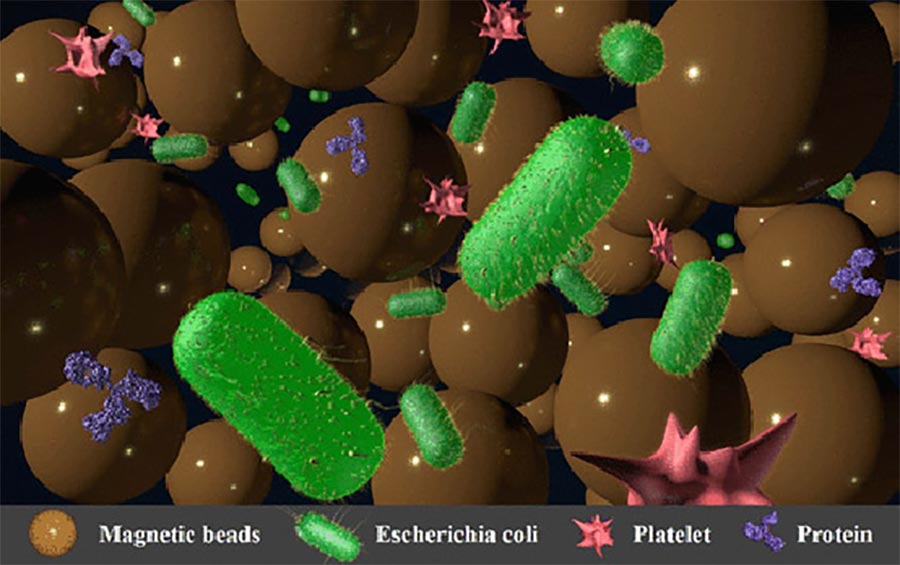 Scientists say they have developed a next-generation miniature lab device that uses magnetic nano-beads to isolate minute bacterial particles that cause diseases. Using this new technology improves how clinicians isolate drug-resistant strains of bacterial infections and difficult-to-detect micro-particles such as those making up Ebola and coronaviruses, according to the team, which published its work “Rapid Escherichia coli Trapping and Retrieval from Bodily Fluids via a Three-Dimensional Bead-Stacked Nanodevice” in ACS Applied Materials and Interfaces.

Ke Du, PhD, and Blanca Lapizco-Encinas, PhD, both faculty-researchers in Rochester Institute of Technology’s Kate Gleason College of Engineering, worked with an international team to collaborate on the design of the new system—a microfluidic device, aka, a lab-on-a-chip. Drug-resistant bacterial infections are causing hundreds of thousands of deaths around the world every year, and this number is continuously increasing. Based on a report from the United Nations, the deaths caused by antibiotics resistance could reach to 10 million annually by 2050, Du explained.

“It is urgent for us to better detect, understand, and treat these diseases. To provide rapid and accurate detection, the sample purification and preparation is critical and essential, that is what we are trying to contribute. We are proposing to use this novel device for virus isolation and detection such as the coronavirus and Ebola,” said Du, an assistant professor of mechanical engineering whose background is in development of novel biosensors and gene editing technology.

The lab team is interested in the detection of bacterial infection, especially in bodily fluids. One of the major problems for detection is how to better isolate higher concentrations of pathogens. The device is a sophisticated lab environment that can be used in field hospitals or clinics and should be much faster at collecting and analyzing specimens than the commercially available membrane filters. Its wide, shallow channels trap small bacteria molecules that are attracted to packed, magnetic microparticles.

This combination of the deeper channels on the nano-device, increased flow rate of fluids where bacteria are suspended, and the inclusion of magnetic beads along the device channels improves upon the process of capturing/isolating bacterial samples. Researchers were able to successfully isolate bacteria from various fluids with a microparticle-based matrix filter. The filter trapped particles in small voids in the device, providing a larger concentration of bacteria for analysis. An added advantage of a smaller device such as this allows for multiple samples to be tested at the same time.

“A novel micro- and nanofluidic device stacked with magnetic beads has been developed to efficiently trap, concentrate, and retrieve Escherichia coli (E. coli) from the bacterial suspension and pig plasma. The small voids between the magnetic beads are used to physically isolate the bacteria in the device. We used computational fluid dynamics, three-dimensional (3D) tomography technology, and machine learning to probe and explain the bead stacking in a small 3D space with various flow rates. A combination of beads with different sizes is utilized to achieve a high capture efficiency (∼86%) with a flow rate of 50 μL/min,” write the investigators.

“Leveraging the high deformability of this device, an E. coli sample can be retrieved from the designated bacterial suspension by applying a higher flow rate followed by rapid magnetic separation. This unique function is also utilized to concentrate E. coli cells from the original bacterial suspension. An on-chip concentration factor of ∼11× is achieved by inputting 1300 μL of the E. coli sample and then concentrating it in 100 μL of buffer. Importantly, this multiplexed, miniaturized, inexpensive, and transparent device is easy to fabricate and operate, making it ideal for pathogen separation in both laboratory and point-of-care settings.”

“We can bring this portable device to a lake which has been contaminated by E. coli. We will be able to take a few milliliters of the water sample and run it through our device so the bacteria can be trapped and concentrated. We can either quickly detect these bacteria in the device or release them into certain chemicals to analyze them,” said Du, whose earlier work focused on devices that use the CRISPR gene-editing technology and the fundamental understanding of fluidic dynamics.

Teaming up with Lapizco-Encinas, a biomedical engineer with expertise in dielectrophoresis—a process that uses electrical current to separate biomolecules—their collaboration provided the increased capability toward better pathogen detection, specifically for bacteria and microalgae isolation and concentration.

“Our goal is not only isolating and detecting bacteria in water and human plasma, but also working with whole blood samples to understand and detect blood infection such as sepsis. We already have a concrete plan for that. The idea is to use a pair of the nano-sieve devices for sequential isolation,” said Lapizco-Encinas, an associate professor in RIT’s biomedical engineering department.

Du and Lapizco-Encinas were part of a team that consisted of mechanical and biomedical engineers from Rutgers, University of Alabama, SUNY Binghamton, and Tsinghua-Berkeley Shenzhen Institute in China to address the global challenges of disease pandemics.

#IoT drives efficiency tech development in smart buildings - Here's an example of a day in the life of a #SmartBuilding. #Infographic via @LindaGrass0 #IIOT #SmartCities #DigitalTransformation #Construction #infrastructure #futureofwork https://t.co/AGsY0UcEGS

Explore Your Options for Full Digital Transformation in Healthcare

An automated health care system that understands when to step in

5 Questions Boards Should Be Asking About Digital Transformation

How games for patients relieve the pressure on healthcare