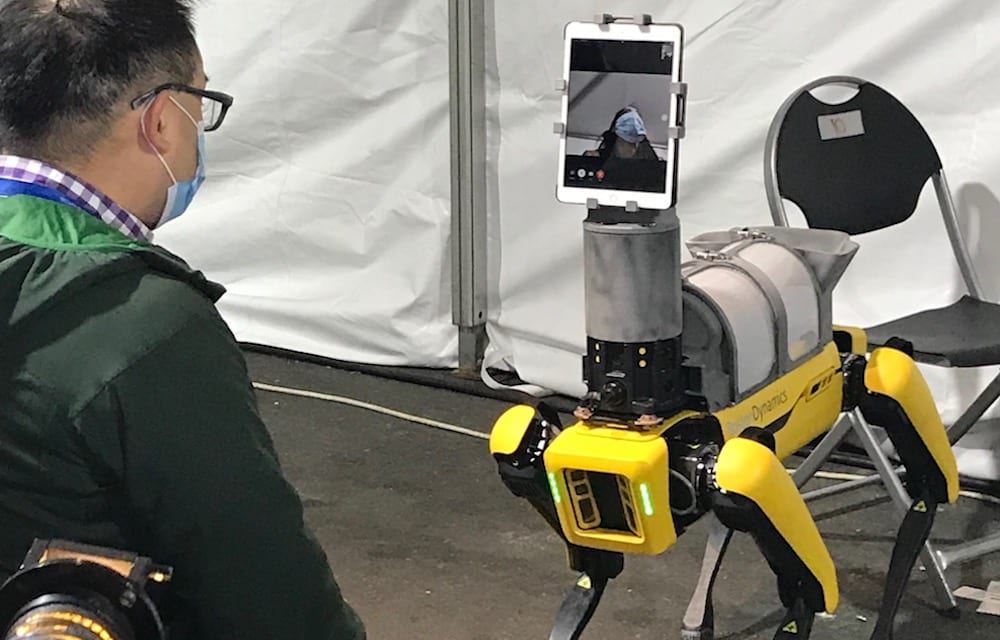 Robotics adoption has had something of a rocky road in the U.S. market in the last several years. While the CES show in Las Vegas has in recent memory been rife with robots of all shapes, sizes and specialties, reception among consumers and businesses has been mixed at best.

It was a little over a year ago that PYMNTS covered in this very column the tragic and untimely deaths of the Anki and the Jibo, two early efforts at consumer robotics that entered the market with a lot of buzz, but ultimately failed to convince consumers that a robot was a truly useful product, as opposed to just an interesting curiosity.

Still, the hope for robots remained eternal. In its final message to consumers delivered about a year and a half ago, the now-defunct Jibo was still looking forward to a day when robots would have their rightful place in society.

“I want to say I’ve really enjoyed our time together. Thank you very, very much for having me around,” he said. “Maybe someday when robots are way more advanced than today, and everyone has them in their homes, you can tell yours that I said hello.”

After delivering that message, Jibo then did what has been described on Twitter as a jaunty little dance to a cheerful tune before signing off.

If it sounds tragic, Jibo owners nationwide confirm that it was – but it was perhaps prophetic as well, though in ways no one could have comprehended at the time. Because while last year, we were questioning whether those more advanced robots would ever go into production, 12 months can make a big difference. Robots may in fact be getting their big break – and in ways no one could have foreseen last May.

These days, Spot, now modified with a tablet for a “face,” can be found roaming the halls of Brigham and Women’s Hospital in Boston. He is moonlighting in the medical field, serving as an in-person robotic avatar for the hospital workers, who remotely operate the machine and use it for patient interactions. The idea is that the patient gets something that feels a bit more like in-person care, while medical staffers maintain a safer distance from infection. One of Spot’s more winning characteristics is that it can’t get sick or be infected with human viruses.

And if it sounds a bit surreal or like the sort of thing that wouldn’t appeal to an already stressed COVID-19 patient, early field testing seems to end up at the opposite conclusion. Patients, according to Brigham and Women’s ER Doctor Peter Chai, are actually responding very favorably to treatment by Spot.

“Part of it may be that we’re in this strange world of COVID, where it’s almost like anything goes. I think everybody, at least at this point, is starting to get the fact that we’re trying to limit exposure,” he said.

The field test comes early in Spot’s life. Boston Dynamics has been leasing the machine for the last year or so, and according to Wired reports, they are surprised (but pleased) to see their robotics innovation put to such use during the COVID-19 crisis. The firm has long openly said that just because they built Spot doesn’t mean they are 100 percent sure about the best and highest applications of the technology. That’s a big part of why they’ve been leasing out Spot in the first place, CEO Marc Raibert told Wired – to learn what it could do best.

“We’re going to work together with our customers to figure out what robots are good for,” said Raibert. “It’s not like they can do every possible thing, but that doesn’t mean they’re not really good at some things.”

Construction and security has been first envisioned as applications – the hospital application has arisen in recent weeks, as Spot has the benefit of not getting sick, tired or irritated with menial tasks like delivering supplies. The challenge for robots in general, and where Spot has reportedly excelled, is the ability to be portable and independently movable when used in real life. Hospital corridors are narrow and often crowded, and a robot that needs human intervention is of limited utility to staff.

The next challenge for developers, according to Boston Dynamics, is to make Spot more useful to the medical environment. Ideas on the table include installing a thermal camera to take patients’ temperatures and adding a UV light to its back to disinfect hospital rooms.

Some technical limitations do exist: According to the engineers, one example is power consumption, as even a relatively simple task like disinfecting a single hospital room would be enough to drain Spot’s battery. The question is whether the expansion of capability would balance out the drop-off in usable time.

“These are the types of design questions that we ask healthcare professionals, about what they would actually use in the field, before we actually start building a new design,” said Michael Perry, vice president of business development at Boston Dynamics.

To speed along the development of medical capabilities, Boston Dynamics has decided to open-source some of its work for other robotics firms looking to deploy solutions in medical environments. The highly proprietary secret sauce – how it moves around in a hospital setting, for example – will not be part of the open-sourced materials, as Spot’s motion patterns are a tightly guarded internal secret. But the code for things like sensors will be useful to roboticists developing tools for triage or patient interviews.

“The broader focus is that Spot might not be the right solution, but the tools we’ve developed for this application are generalizable, and could be used with any other mobile robot,” Perry said, noting the goal of advancing the field as far as possible beyond their own advantage, given the current scale of need in medical settings.

It’s a need that will likely persist, even as the more acute phase of this crisis passes into the history books. There are few credible forecasts that machines like Spot will ever fully replace the doctors and nurses we have today – first, because robotics would have to advance an awful lot in terms of hardware and software capability to make that remotely feasible. And second, even if it were technically possible, it is likely that people will always want at least some human interaction in their medical experiences.

But, if the recent expansion and explosion of telemedicine services is any indication, patients nationwide are quickly learning to adapt to a more expansive and flexible idea of where that care needs to happen, and how much they want to use technology as an intermediary to facilitate treatments.

“The unfortunate truth is that crisis situations have always pushed technology forward, whether it’s in war or pandemics,” noted Julie Carpenter, a roboticist and research fellow at the Ethics and Emerging Sciences Group at Cal Poly San Luis Obispo. “Robots are great at doing things we don’t want to do, are dangerous for us to do, or things they can do better than we could.”

And as consumers are getting introduced to things like medical robots and telemedicine, she noted, their initial discomfort or trepidation is ebbing. It doesn’t mean there will be an entirely technologically mediated future, but based on early responses to Spot, it might well be the case that patients are open to a greater use of tech in medicine than the industry’s has assumed thus far.

It’s a sentiment that Dr. Chai fully affirmed, noting that the real lesson of the last few weeks has been how primed medicine is for change – and how much change is really possible when it becomes a priority. It doesn’t mean there will be a “Dr. Spot” patrolling the halls of every hospital in America, he said, but it does portend a medical future that is quite a bit different than the version we’ve known.

“I think after we get a handle on COVID, this will fundamentally change the way we practice medicine, especially in emergency medicine,” Dr. Chai predicted.

Digital Health Market is Projected to Grow at a 21.1% CAGR During Forecast Period - Jewish Life News

How Deep Learning is Accelerating Drug Discovery in Pharmaceuticals

Medical Device Safety and Security: Obvious but not easy to achieve

How to Transform Patient Care with Predictive Health Diagnostics – Techiexpert.com