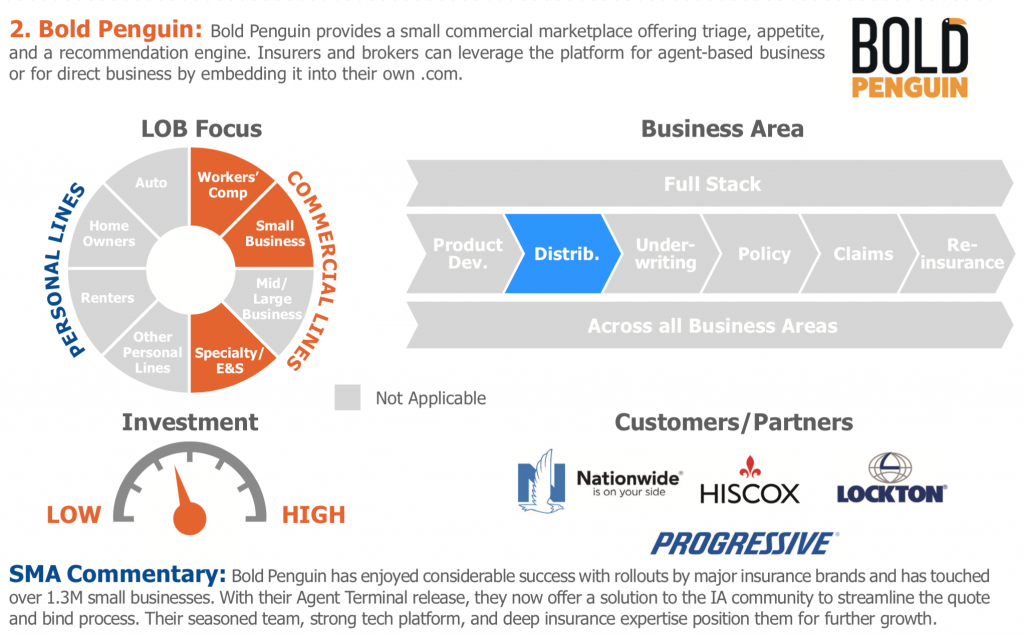 The InsurTech movement is about a decade old, according to many who study it, and in that space of time we should expect to see some meaningful shakeout. That’s one of the assumptions of a new Strategy Meets Action (SMA, Boston) report, “Top 50 InsurTechs in P&C Insurance.” The list is meant to serve as a convenient guide of the InsurTechs that North American P&C carriers should be aware of. In its design it employs brevity and ease of review, using graphics for quick study of the entries. The report orders the companies alphabetically—from Betterview to Zesty.ai—and matches them to the line of business and portion of the insurance value chain they address. The study also includes sections on “Digital Brands”—startups under the aegis of carriers, and “Successful Exits”—important InsurTechs that have already been acquired and assimilated, to one degree or another, within other entities, as well as a list of other InsurTechs worth consideration.

However, a brief report could not recognize all the companies that have survived the crucible of the last decade. As with any such list, notes co-author Mark Breading, a partner at SMA, hard decisions had to be made about who was or was not included. While the report should be taken as congratulating the 50 honorees, there are in fact many InsurTechs that are making contributions to the industry and have the potential to grow, according to Breading. “For that reason, we included a second list of other InsurTechs worthy of consideration,” he says. “And even then, there are still others that are likely to emerge as winners over time.”

Given that InsurTech is a kind of fad—even if a very beneficial one for the insurance industry—companies may refer to themselves as InsurTechs in their marketing collateral without being eligible for SMA’s Top 50. Like the author, the reader may think of companies and wonder why they’re not on the list. In many cases it’s simply because they were founded before 2010, one of SMA’s criteria. To illustrate the potential for tough decisions, both FRISS (Chicago/Utrecht, Netherlands) and Shift Technology have become highly successful vendors in the fraud detection space, but the former was founded before 2010, and so only the latter made the list.

Many of the most successful insurance technology vendors were startups at some point and many more recently founded companies are doing yeoman’s service in areas associated with InsurTech, such as digital transformation and customer experience, or the application of new data sources and AI. “It is important to note that there are incumbent tech companies that may not be considered InsurTechs but nonetheless have innovative solutions to address insurer needs,” Breading stresses. If the SMA Top 50 were meant to simply honor the “best” InsurTechs of the past 10 years, it would include companies that have been acquired. SMA designed the list to be about extant independent companies and created an adjunct list to note “Successful Exits,” such as Cyence—acquired by Guidewire Software (San Mateo, Calif.), TechCanary and Indio—both acquired by Applied Systems (University Park, Ill.), and  Coverwallet—acquired by Aon (Chicago). The list also list an InsurTech acquired by one of the Top 50—xagent acquired by Bold Penguin (Columbus, Ohio).

Innovation May Come from Many Sources

The main presumption of the list, whatever the inevitable limitations of such compilations, is that the 50 companies chosen have proven themselves individually as worthy of consideration and that collectively they will play a significant role in the transformation of the insurance industry over the next decade. That being the case, Breading urges readers to note the other three lists without considering those exhaustive either. “While it is important to recognize the InsurTechs launched during the InsurTech wave of the last decade, it is equally important to understand that innovative approaches and solutions may come from many sources including incumbent tech vendors and from organic development within insurers,” he says.

Insurance Tech Vendors: The Best of Times and the Worst of Times

Consumers and data are driving changes in the insurance sector: Where are we headed? – TechCrunch

Half of insurance customers are willing to consider insurtechs