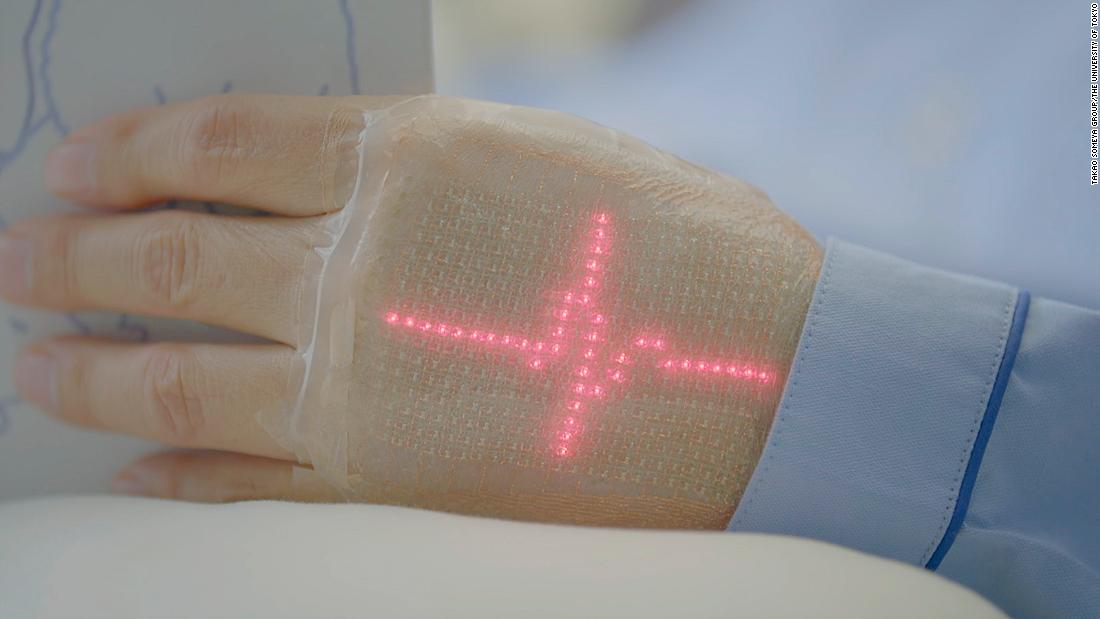 Researchers in Japan say they have developed an ultra-thin, lightweight e-skin that is stuck to the chest area using water spray and can be worn for a week at a time.

The technology was developed by Takao Someya, a professor at the University of Tokyo’s Graduate School of Engineering. It has yet to undergo clinical trials, but Someya says he has started working with partners to develop manufacturing processes.

"E-skin is the next generation of wearables," Someya tells CNN Business. "Today’s mainstream wearables are in the form of smart watches and glasses, which are bulky. In contrast, e-skin is thin, lightweight, stretchable and durable."

His latest e-skin was designed with Japan’s rapidly aging population in mind. For remote health care to be most effective, Someya says it is important to monitor older people’s health for long periods with high precision. Because of its durability, he says the e-skin is a powerful tool for monitoring chronic diseases like diabetes, as well as heart failure. It may also help detect early signs of illness.

Someya is also developing an LED display, in partnership with

, to be worn on the back of the user’s hand. Designed for older people or those with who have difficulty using a smartphone, it will show heartbeat data transmitted by the e-skin in the form of large and easily understood graphics. It can also display simple emojis — including a heart and a rainbow — sent by friends and relatives from a smartphone, to help older people feel connected to their loved ones.

The LED display developed by the Takao Someya Group at the University of Tokyo.

according to a report

by Grand View Research. Because e-skin is highly flexible,

sometimes with the ability to repair itself, it has

the potential for use in robotics, prosthetics and health care.

Someya and his team

started developing e-skin for robots in the early 2000s. And other research from their

lab is being developed for the marketplace through two spin-off companies — Signtle, for medical applications, and Xenoma, for smart clothing.

Xenoma has integrated e-skin into pajamas that can monitor temperature in bed, and sportswear for fitness monitoring.

The startup has partnered with Taekwondo practitioner Mana Umehara to see how e-skin can benefit high-performance athletes. Its technology tracks her body movements and sends the information to a laptop, where software translates it into data visualizations. This kind of movement tracking normally requires multiple cameras, Someya says.

During the pandemic, Umehara was unable to train with her coach but she could send data from the e-skin clothing, so her performance could be monitored remotely.

"Now I can get more precise instructions with numbers for how many centimeters to extend [my movement] or how powerful it should be," she tells CNN Business.

Someya says 5G will have a "tremendous impact" on wearable technologies, including e-skin, by increasing the amount of data that can be transmitted wirelessly at high speed, giving users access to their health information in real-time.

"The ultimate goal of e-skin is to monitor all the different types of human information easily, anywhere and anytime, without disturbing daily activities," he says.

BitGo's $700 million crypto custody insurance program: what it means and why it matters

How your digital twin will increase your health

The secret sauce of health tech innovation
Healthcare will never be the same: 8 experts on the future of medicine around the globe
Why Innovation in Times of a Pandemic Is Inevitable